Posted at 15:40h in Wine of the week by HowdyPress 0 Comments 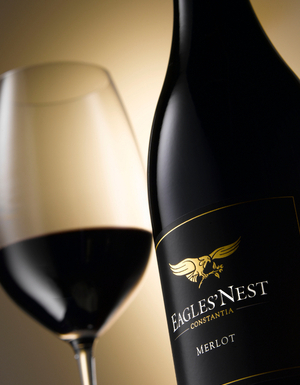 Background: Eagles Nest was originally a commercial fruit and vegetable farm up until 1960 and a part of the Groot Constantia farm. Having had several owners since it was bought by the present owners in 1984. It was only in 2000 after the devastating mountain fire which destroyed the forests and natural fynbos on the farm and surrounding area that the Mylrea family decided to produce wine. With its unique terroir and after having the soils analysed it was felt the soil would be more suited to red varieties which they planted. The land rests on what is believed to be the Cape’s steepest commercially-farmed land.

I visited the farm last week during a raging Cape storm which was a perfect time to sample their wines as I was shown to a warm log fire in the tasting room with winemaker Stuart Botha. Although having a reputation for their award-winning Shiraz, I was duly impressed with their Merlot 2009. Grapes were harvested from six and seven-year-old vines and after almost 10 days of fermentation the wine was pressed and then transferred to first, second and third fill barrels where it went through malolactic fermentation. After 16 months maturation the wine was bottled.

Result: This 100 percent Merlot is silky smooth with rich voluptuous red and black cherry fruit where the structured tannins support the tremendous depth and length of this wine.

Drink with what: Lamb and rosemary pie.