Posted at 09:20h in Wine of the week by HowdyPress 0 Comments 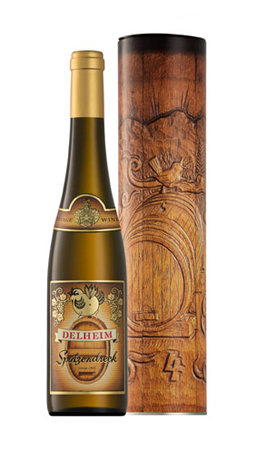 Background: Up to the 2012 vintage, Spatzendreck, was made as a Late Harvest wine from 100 percent Chenin blanc, but a family decision led to the 2013 vintage to be made as a Natural Sweet wine using Muscat de Frontignan, Weiser Riesling and Chenin Blanc and only 2400 bottles were produced. The label continues to portray the somewhat cheeky Sparrow and each 500ml bottle is sold in a tube depicting the carving of one of Delheims barrels.

“We have given our Spatzendreck a new – and dare I say more sophisticated – lease of life by producing it in smaller volumes as a Natural Sweet wine, using three different varietals. The major difference between this vintage and its predecessors is the residual sugar which we have increased from 75 g/l to almost 130 g/l. The reason being that we wanted to produce a more serious wine with a greater ageing potential,” explains winemaker Reg Holder, a terroir enthusiast who joined the estate in 2011.

The three varieties for the Spatzendreck Natural Sweet 2013 were picked from Delheim’s prized vineyards in the Simonsberg ward of Stellenbosch. The grapes were vinified separately and aged on their primary lees in old oak for nine months prior to blending.

Result:  Exotic aromas of honey and citrus, whilst the palate rewards with delightful tangy orange marmalade with balanced  acidity controlling  the delicious sweetness as well as  accentuating  the fruit flavours.

Drink with what: Fruit-based tarts or at the end of a meal with a selection of fine local estate cheeses.