Posted at 09:40h in Wine of the week by HowdyPress 0 Comments 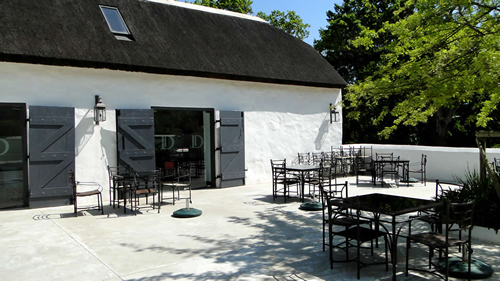 Doolhof is an intriguing wine estate nestled in the rich fertile, and beautiful valley just outside Wellington, below the start of the Bains Kloof Pass. The name Doolhof is Afrikaans for “Labyrinth” According to Greek mythology Labyrinth was the name given for a large and elaborate structure created for King Minos of Crete, to secure the scary Minotaur (a supposed creature that was half man and half bull)! Labyrinths are designed to have only one entry and exit point i.e a single pathway to the centre.

They have over the centuries being used for meditation as apparently while walking and focusing on the paths soothes the mind and calm’s the nerves….great for stress relief! Early settlers when seeing the farm for the first time noted the many hills and valleys reminding them of a Labyrinth!

Although the farm has been in existence for three centuries, it was only in 1995 that vineyards were planted and the first bottling happened in 2001. The present owners acquired the property in 2003 and have since built a winery and a tasting facility. They too have restored the magnificent Manor House on Doolhof, named Grand Dedale….which is certainly worth a visit.

The Dark Lady Pinotage is part of the Legends of the Labyrinth range within their portfolio of quality wines. The other ranges from this farm are the “Signature” collection followed by the Estate range and then, last but not least, the Cape range…the latter having titles for wines such as Loerie, Roan and Boar (the intense red blend)!

The Doolhof “Dark Lady of the Labyrinth” is made predominantly from pinotage and has benefitted from several months maturation in French oak before finally being bottled. Aromas of rich dark chocolate and coffee beans with gentle wafts of cinnamon and spice lead seductively onto the palate packed full of warm chocolaty flavours with gentle tannins on the finish.

The Dark Lady can be enjoyed on its own or with rich duck and cherry pie, but I suggest you try it after dinner with your cup of coffee and a few dark chocolate truffles!