Posted at 11:24h in Featured, Wine of the week by HowdyPress 0 Comments 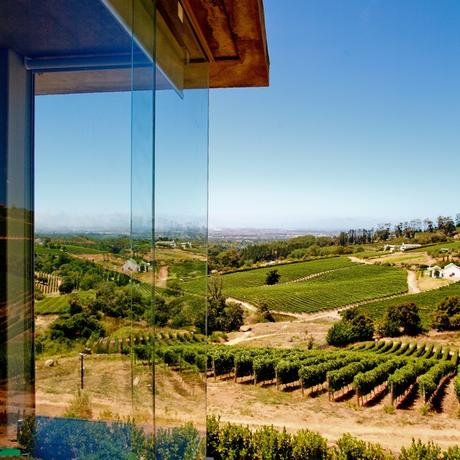 It was a typical Cape winter’s evening with rain and temperatures dropping due to the recent snowfalls over the distant Helderberg mountains, and I was on my way to Beau Constantia for the launch of two special red wines, the Lucca and the Aiden.

The winery is perched on top of Constantia Nek and had the weather been clearer, the view from the tasting room overlooking False Bay is spectacular. Sommeliers, wine buffs and friends of the owners, Pierre and Cecily Du Preez, were warmly welcomed from the cold outside and we enjoyed a glass or two of their excellent Cecily Viognier while waiting for the unveiling of the two reds.

The Du Preez family bought the farm in 2002 and as a result of the devastating  fires two years prior to which destroyed any form of vegetation the steep slopes had been cleared and terraced and were ready for planting vines.

After having had professional soil analysis the first vineyards were planted in 2003 by their farm manager, Japie Brom. The steep slopes made it difficult to speed up the planting process but with patience and dedication by the team on the farm they now have 11.47 hectares under vine.

Varieties planted include Viognier, Sauvignon Blanc, Semillon, Cabernet Franc, Merlot, Cabernet Sauvignon, Malbec, Shiraz and Petit Verdot. The first wine made from their vineyards was the Cecily Viognier 2010 which immediately garnered accolades and was voted the best Viognier at the 2011 Terroir Wine awards and rated 92 points in the respected Wine Advocate in America.

After an introduction by winemaker, Justin van Wyk, the Lucca 2011 and Aiden 2011, named after the Du Preez children, were poured for tasting along with food to match. Both these wines are from the maiden vintage and the Aiden is a blend of 37 percent Malbec, 27 percent Merlot, 27 percent Petit Verdot and nine percent Cabernet Sauvignon. A wine brimming with excitement from the inky black colour to the sweet aromas of ripe black cherry fruit leading to a complex tightly integrated palate with rich texture.

It reminded me of a beautiful creature that has been caged and is waiting for its release to show its full potential. It’s a serious wine and will reward handsomely in years to come.

The Lucca, however, offered a different experience. Made up of 63 percent Merlot and 37 percent Cabernet Franc, the wine stole the show on the evening. Although the wine is only two years old its appealing elegance and graceful mouth feel had us all asking for more.

The colour is a deep crimson and the aromas of black berries and ripe plum with hints of savoury tomato invite you to the palate where you experience the full, rich silky black fruit flavour along with lovely minerality leading to a well defined finish.

Of course, the wine will benefit from ageing but it is a beautiful wine just to sip quietly and enjoy in the company of a perfect fillet with hollandaise sauce!