Posted at 10:21h in Featured, Wine of the week by HowdyPress 0 Comments 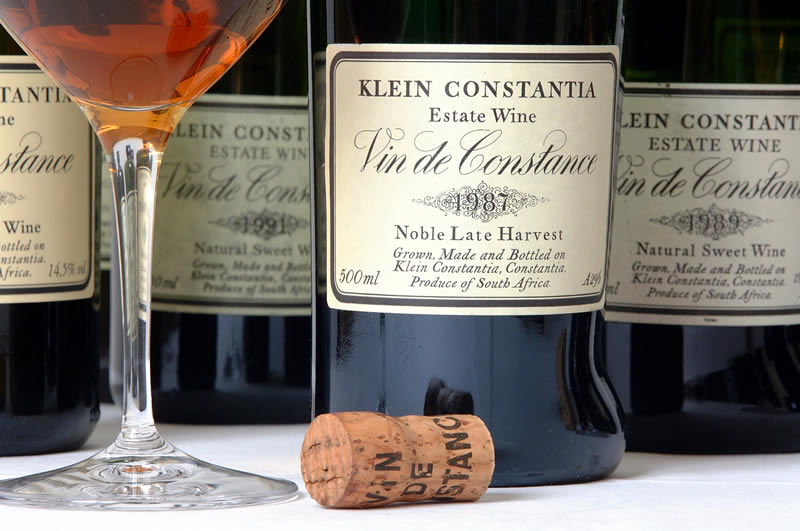 The Klein Constantia Vin De Constance is a legendry natural sweet wine which was often mentioned in the European literature of the 19th Century.. In “Edwin Drood”, Charles Dickens tells of “…the support embodied in a glass of Constantia and a home-made biscuit”, while Jane Austen recommends that her forsaken heroine try a little Constantia for “…its healing powers on a disappointed heart”. A German poet, Klopstock, devoted an entire ode to the pleasures of this sweet wine, while Baudelaire transformed it into a sensuous image for his great brooding poem “Les Fleurs du Mal”.

Kings of old tussled to lay their hands on this wine; Louis Philippe sent emissaries from France to fetch it; Napoleon drank it on the island of St Helena to find solace in his lonely exile; Frederick the Great and Bismarck ordered it; and the English Prime Minister – who had sampled it with much delight at Downing Street – made sure that regular consignments from the Cape were delivered to Buckingham Palace for the King.
Eminent wine writer, Hugh Johnson, wrote “From these Elysian fields used to come one of the very greatest wines in the world – the legendary Constantia. Constantia was bought by European courts in the 18th and 19th Centuries in preference to Yquem, Tokay, Madeira…”.
However not all bode well for this famous Constantia wine as towards the end of the 19th Century, the dreaded disease “Phylloxera” arrived at the Cape, causing devastation in the vineyards and many wine farmers were put out of business. Due to this disease production of Vin De Constance was halted but the legend lived on having being immortalised in literature as well as older bottles still found in cellars of foreign wine collectors.

In 1980 Klein Constantia was bought by Duggie Jooste and during the redevelopment of the Estate, all involved on the farm were determined to bring back this famous sweet wine. Early records were studied and careful selection was made from vines which, in all likelihood, came from the original stock used in Constantia 300 years ago.
In 1986 the wine was reintroduced to the public and packaged in a similar style 500ml bottle to its forebears and offered in a presentation box which included a leaflet describing the wine and its history. So the legend lives on and now with new owners since 2012, it continues to be given the presence it deserves as one of the world’s finest dessert wines.

The 2008 vintage was unveiled in August and it follows on from the highly rated 2007 which received 97 points in the sought after Parker ratings. The wine is a natural sweet wine having no botrytis, yet perfect ripeness to make it a velvety rich dessert wine along with fine mineral acidity. Made from Muscat de Frontignan grown on the mother vineyard which was planted in 1983 the 2008 was aged in a combination of 500L French and Hungarian oak barrels for 4.5 years, of which 60% were new barrels. The wine shows a deep bright golden colour with orange zest and ripe apricot aromas which evolve on the fresh, clean palate along with silky flavours of apricot and peach with delicate hints of marmalade on the luxuriously long finish. Perfect to savour now but these are wines that enjoy years of maturation as well as being an excellent investment. Examples of older vintages that have been cellared in perfect conditions can fetch prices of R10,000.00 per bottle and more!