Posted at 09:09h in Wine of the week by HowdyPress 0 Comments 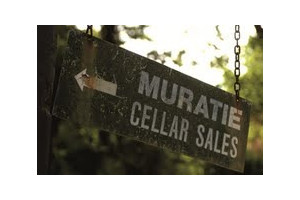 The farm on which Muratie Wine Estate is situated started life back in 1685 when it was granted  to a young German soldier, Laurens Campher, by Governer Simon van Der Stel. This surely must make Muratie one of the oldest estates in the Cape and judging by the delightfully olden tasting room, along with cobwebs, there are interesting stories from all the characters that lived there!

Perhaps, though, the most influential owner to commence wine production on Muratie was George Paul Canitz. He started life in South Africa after he had come here for reasons of health, which obviously improved as he decided to stay and opened up an art school in Stellenbosch. One day in 1925 he and his family, while out riding on horseback, became slightly lost and they eventually stumbled across a derelict old farm called Muratie (a Dutch word for ruins!).

History welcomes one to the cellar and tasting room

He fell in love with the tranquil beauty of the farm and took possession of it in 1927 with a decision to plant new  vineyards. As he was an artist and knew very little about farming, he sought help from  wine scientist, Professor Perold, of Stellenbosch University . Perold analysed the rich and fertile soils and encouraged Canitz to plant a number of red varieties including Pinot Noir, which was the first time this variety had been planted in the Cape. Canitz continued his career of painting (a number of which hang in the tasting room today)  as well as producing good red wines with the Muratie Pinot Noir being the most famous. Canitz lived till 1958 after which his daughter took over the reigns and along with winemaker Ben Prins they managed the farm until Ronnie Melck purchased Muratie in 1988. The famous tasting room with equally old cobwebs in place.

Today Muratie is owned and managed by Ronnie’s son, Dr Rijk Melck, who has revived the rich heritage of this estate as well as the brand by naming his range of wines after the many characters that have made up its history along its way! An invitation last week to attend a vertical tasting of Muraties three premium wines was a great opportunity, especially as these wines are perfect  for enjoying during the winter months ahead. Muratie’s wine maker since 2005, Francois Conradie, started us off with a flight of 5 vintages of their Isabella Chardonnay (named Isabella after Rijks first daughter). First in the line up was the 2008, a rich creamy wine with flinty, honeyed aromas leading to a silky mouthfeel of buttered toast, biscotti and lime filled fruit flavour, and yet still retained an impressive lingering freshness. A similar pattern followed through the next 4 vintages ending with the current 2012, which we felt had the structure to develop into a wine similar to the 2008. Shiraz was next and  we were guided through six impressive vintages from the 2005 to 2010. There was a similar thread with each wine offering an intrigueing  development of dark berry spicy aromas with intense rich and meaty flavours with supporting savouriness complimenting the fruit. The tannin grip held well with the big fruit flavours, with the 2007 vintage adding some liquorice flavours on the finish. I thought of winter stews and venison would compliment this style of Shiraz!

Now to the final flight of six vintages of their flagship red blend, The Ansela van de Caab. Named after Laurens Campher’s girlfriend, who having been born into slavery, was only able to marry her after emancipation in 1699!  Since 2006 the blend for this wine is made from predominantly Cabernet Sauvignon, with lesser parts of Merlot and Cabernet Franc. Prior to this we tasted the outstanding 2005 which is Merlot driven with 30% Cabernet Sauvignon and 5% Cabernet Franc. The Ansela van de Caab is a rich full bodied  wine which ages gracefully, and express’s the suitable terroir for the three red varieties used in this blend and which are grown on the estate. The 2009 is the current vintage available and showed beautifully on the day. The wine shows a deep ruby red colour with enticing aromas of minty scrub, violets and liquorice which leads to a rich silky palate of wild berry fruit flavours with gentle tannins complimenting the overall elegance of the wine.

We enjoyed the wine with Kim’s (Rijks wife) delicious Lambs Shank with vegetables grown on the farm. Kim looks after the small restaurant next to the tasting room which offers a choice of four to five home cooked meals each day. She is also well known for her nougat aptly called “Sticky Fingers”!