Posted at 13:16h in Wine of the week by HowdyPress 0 Comments

The magnificent wine farm Mont Rochelle Mountain Vineyards is located on the slopes of the beautiful Franschhoek Mountains, close to the centre of Franschhoek. The estate is part of a farm first owned by Jacques de Villiers, one of the original Huguenots that came to the valley in 1688 to escape religious persecution in France. 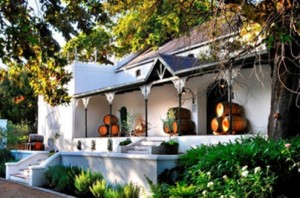 Mont Rochelle has been producing wine since 1995 when Graham de Villiers (an eighth generation descendant of Jacques de Villiers) bought the property. It was initially a fruit farm, but after the farm’s soils had been carefully analysed, they decided they would produce wine instead.

So gradually, over an eight-year period, the fruit trees were uprooted to make way for vines. Today, vineyards on the farm consist of Sauvignon Blanc, Chardonnay, Viognier, Cabernet Sauvignon, Merlot, Shiraz, Mouvedre and Petit Verdot, as well as a small amount of Semillon.

The winery on the 33 hectare farm is an old fruit packing store dating back to the 1850s, which with the onset of the grape production, was turned into a 200 ton capacity wine producing cellar.

In 2001, the farm was bought by Miko Rwayitare, a Congolese telecommunications entrepreneur, who ran the farm until 2006. The La Couronne Hotel and Restaurant was part of the property but was severely damaged by a fire in February 2006.

With the temporary closure of La Couronne, well-known as a gourmet destination, owners Miko Rwayitare and Erwin Schnitzler used the opportunity to merge the hotel and their neighbouring Mont Rochelle Mountain Vineyards, to create the new Mont Rochelle Hotel and Mountain Vineyards brand. Sadly Miko Rwayitare died in 2007, while on business in Europe, and so today, Mont Rochelle is run by Erwin Schnitzler, an experienced German Hotelier who has previously owned Michelin-graded restaurants in Germany.

Two ranges of wines are produced at Mont Rochelle starting with the flagship Miko range which Erwin created in honour of his late partner, to the Mont Rochelle Hotel & Mountain Vineyards range.

With spring slipping away I had a good excuse to enjoy a few Rosés this weekend. Rosés have become popular, especially the drier versions, as they complement outdoor living and eating – particularly lighter, summery Mediterranean-style food.

The Mont Rochelle Rosé 2010 from the Mountain Vineyards range is a combination of predominantly Syrah grapes, with a dash of Viognier for fruit and structure.

Winemaker Darran Stone created the wine in the classic European style of Rosé making it perfect to drink on its own or over a lazy Sunday buffet lunch. The time between vintage and drinking has given the wine a lovely developed richness without losing any of its initial freshness. Bright pomegranate in colour, it has subtle aromas of warm earth and baked strawberry flan with the palate showing elegant flavours of red cherry and raspberries leading to a crisp, dry finish.

If you intend to visit Franschhoek soon then try this Rosé at Mont Rochelle’s Restaurant, Mange Tout, with their Beetroot with Truffle, buffalo yoghurt, and micro herbs dish. It’s a perfect match!