Posted at 10:10h in Wine of the week by HowdyPress 0 Comments

Flanked by the Helderberg and Stellenbosch mountains between Stellenbosch and the False Bay coast, lies an exceptional tract of land that is highly suited to the cultivation of quality wine grapes. This area is considered the jewel in the crown of the superb Stellenbosch wine-growing region and is often referred to as the Golden Triangle. In the centre of this Triangle lies Stellenzicht  Vineyards.

Stellenzicht’s history dates back to 1692 when it was part of a much bigger farm granted to its first owner by Simon van der Stel (at that time the governor of the Cape). He had named his property Rustenburg despite there already being another farm with an almost identical name, spelt Rustenberg! Confusion reigned and according to local legend, two subsequent owners met one evening in a pub in Stellenbosch.  After several drinks, they agreed to flip a coin for the privilege of the exclusive right to the name.  Rustenberg (which still exists today) won, with the former farm Rustenburg becoming Stellenzicht, which literally means “view of Stellen” (or Stellebosch).

Stellenzicht is a 227 ha farm of which 101 ha are planted to vines. Grape varieties include  Cabernet Sauvignon, Cabernet Franc, Merlot, Malbec, Pinotage, Shiraz, Petit Verdot, Chardonnay, Sauvignon Blanc, Semillon and Viognier. The soil types are suitable for these cultivars and as many farms are doing now they have an ongoing alien vegetation clearing project which was embarked on some five years ago. They hope to soon be part of the Biodiversity & Wine Initiative (BWI).

Several ranges are produced from Stellenzicht and they  reserve the  Golden Triangle range for their  wines which demonstrate the unique terroir of this special area of the Helderberg.  Although the Golden Triangle Range has been around for sometime it was decided to recreate the branding for four of its wines. They are a 2009 Shiraz, a Cabernet Sauvignon and a Pinotage, both from the 2010 vintage, and a 2012 Sauvignon Blanc. 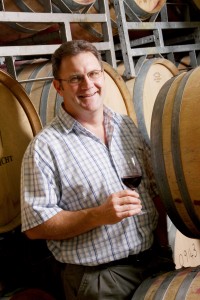 “We’ve made wines, in the past, under the Golden Triangle name, but the upgraded new range is much more clearly defined, with an identity all on its own,” says Guy, winemaker at Stellenzicht. “It is indeed intended as a tribute to the area.

“In my view, what all the wines from around here have in common is balance. That is why the name we have chosen refers to a triangle in mathematics which is in perfect balance in that its three angles are in a 2:2:1 proportion. The observant will recognise this symbol, known in mathematics as an isosceles triangle, as the one depicted on the labels of the new range.”

“This obsession with balance, the Golden Ratio, as found in nature and the greater world around us, has for centuries occupied mathematicians, philosophers and artists such as Leonardo da Vinci. The quest for perfect balance is also what motivated us in creating the four wines in our new series,” says Guy.

We tasted through the quality range alongside a delicious and carefully prepared pairing menu by the team at La Moutte in Sea Point. I particularly enjoyed the Chalmar Beef Sirloin, with bone marrow crust, cassis caviar and  smoked onion puree. The meal was served with the Golden Triangle Cabernet Sauvignon 2010. Deep plum in colour with aromas of  ripe blackcurrant and black cherries with classic hints of pencil shavings and tobacco. The palate is a concentration of brooding cassis flavours with sweet vanilla on the oak finish.