Posted at 09:30h in Wine of the week by HowdyPress 0 Comments

I first met Ken Forrester in the late 70s. Ken at the time was running the popular Gatrilles & Son restaurant in Johannesburg, while I, a few blocks away, was working at the five-star Carlton Hotel. We had a few things in common: fast motorbikes, classic cars, good food and wine, so there was plenty for us to natter about! 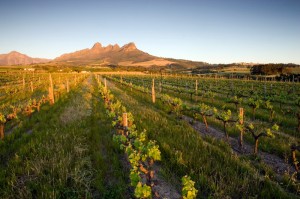 Due to the erratic nature of our work (shifts, late nights etc.), we usually only managed to get together on Sundays when we would take our powerful machines for a breakfast run to the Magaliesberg.  While enjoying breakfast in the country after an exhilarating bike ride we would talk about wines we had tasted recently and whether they would be worth buying for laying down. Ken enjoyed collecting wine and if he liked a particular vintage he would immediately buy a case to put away for future enjoyment.  As he was living in a small two-bedroom flat space became an issue and so he  converted the second bedroom into a cellar and over time it was packed from floor to ceiling with a substantial collection!

Ken’s continued enthusiasm and interest in wine inspired him and his wife Teresa in 1993 to purchase the Scholtzenhof wine farm between Stellenbosch and Somerset West. They immediately got to work restoring the 17th century homestead, replanting the vines and in 1994 produced their first Chenin Blanc from neighbouring 30-year vineyards around the Helderberg region. This was the beginning of Ken Forrester Wines which today through sheer hard work and determination they have undoubtedly become one of South Africa’s most successful wine brands.

When not making wine at harvest time, Ken spends a considerable amount of his time travelling and promoting his products both locally and abroad. His talks and wine tastings are inspiring as he has indepth knowledge of not only his wines but how our Cape wines in general are perceived worldwide.

Recently Ken presented a tasting for the media where we  tasted wines from past vintages, current vintages and wines he is considering adding to his range in the future. Possible future additions that we tasted included a stylish Viognier, a deliciously rounded Rousanne, a Sangiovese/Cabernet Blend and an intense purple-hued wine made from Petit Syrah.

Ken is well known for his excellent  Chenin Blancs and of course they were well received on the day within the line up of wines tasted, but the wine of the day for me was the Renegade SMG 2007.

The Renegade is a beautifully balanced blend of Shiraz, Mourvedre and Grenache and the 2007 offers attractive spicy plum and earthy aromas. The palate delivers rich and meaty flavours, along with hints of nutmeg leading you to a long savoury finish.

We enjoyed the wine at Ken’s restaurant, 96 Winery Road, over a meal of pasture-reared, deboned chicken, rolled with sage onion and walnuts served with organically grown spinach and a wild Helderberg mushroom sauce!