Posted at 14:40h in Wine of the week by HowdyPress 0 Comments

The La Motte wine farm is situated at the gateway to the beautiful Franschhoek Valley in the Western Cape. The farm is a well known producer of fine wines, recognized internationally and locally for its exceptional quality.

Its history goes back to 1695 when the land was originally granted to a German immigrant, Hans Hattingh. A few years later, Hattingh sold it to Pierre Joubert, a French Huguenot, who named the farm after his birthplace in France – La Motte d’Aigues.  Still, it was only in the mid 1700s that viticulture began on La Motte by descendant Gabriel du Toit.

The year 1970 saw the start of big changes for La Motte when entrepreneur Dr Anton Rupert purchased the farm. Extensive renovations to buildings, along with ongoing replanting of the vineyards and a conservation programme helped build the way forward for a successful enterprise. Today, La Motte is owned by Hanneli Rupert-Koegelenberg with her husband Hein Koegelenberg, the CEO.

La Motte is an interesting place to 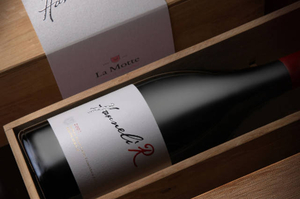 visit and besides the lovely wines to try in the Tasting Room, there is a cultural museum featuring aspects of the Rupert family, and in particular highlighting the incredible musical career of Hanneli Rupert (Hanneli arranges monthly classical concerts at La Motte which are a must for classical music lovers).

The largest room in the museum houses an extensive collection of sketches and paintings from renowned South African artist Jacob Hendrick Piernief. The museum is the start of the historic walk where visitors are guided through the history of the buildings on the property.

Food lovers won’t be disappointed either with the magnificent Piernief Restaurant where chef Chris Erasmus prepares delicious traditional fare with a modern twist.

La Motte cellarmaster Edmund Terblanche has been responsible for the wine production here since 2000 and with the assistance of Michael Langenhoven since 2006.

La Motte produce two ranges of wines, namely, the Pierneef Collection and the Classic Collection. However a new flagship wine was introduced a couple of years back called Hanneli R with the first vintage being the magnificent 2005. Collectors of fine wines scurried to buy up the limited quantity made and so it’s good to know that the second vintage, the 2007 has been released.

The Hanneli R 2007 is a superlative wine which deserves a place in any discerning cellar as it has the potential to mature gracefully for eight to 10 years. The wine is a blend of Shiraz (81 percent) grown in the Walker Bay and Elim region with Grenache (10 percent) and Mouvedre (nine percent) from the Darling region.

It has a deep and intense plum colour with aromas of black cherry, mulberry fruit bursting through, along with subtle hints of cinnamon spice.

The palate is rich and complex with flavours of ripe dark fruit balanced with clever use of oak allowing for an intriguing fresh, minerally finish.

Despite its complexity and ageing ability, I opened a bottle on the weekend to enjoy with a rich venison pie and was pleased I did as it partnered the food perfectly. I can see that it is going to be difficult not to open the other bottles I have bought for aging but I will try resist!

I acknowledge that the wine is expensive but then the quality and rarity makes up for that and I believe this will be a good investment for any wine collector.