Posted at 10:27h in Wine of the week by HowdyPress 0 Comments 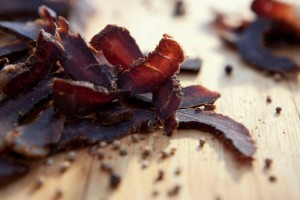 I am addicted to beef biltong, so for Christmas a family member gave me a Biltong making kit. I imagine they were thinking that this machine would churn out loads of excellent biltong to help ease my affliction! The Biltong King required assembling and because I lack DIY skills I conveniently hid it away and continued to buy the ready made biltong from my local butcher!

An invitation last Friday by Stellenbosch Hills winery to attend a biltong making course at Freddy Hirsch changed my outlook about making my own biltong. (Freddy Hirsch, South Africa’s biggest spice suppliers to the meat industry, have joined forces with Stellenbosch Hills as the sponsor for the Biltong Maker Of The Year 2012 Challenge).

During the fascinating lecture we learnt how to prepare and cut the meat correctly as well as about the best spices to use to produce different flavoured biltong. We were each given a parcel of meat, which we carefully spiced for the flavour we wanted, as well as a Biltong King maker (yes I now have two!) and told to let the meat “rest” for several hours before starting the drying process. While the meat was resting in the fridge at home I attempted to assemble the biltong maker and found it to be a lot easier than I had anticipated and so on Friday evening my four pieces of hunters spiced sirloin were hanging in the biltong dryer where they will hang for the next 4 days!

Of course I am hoping that my spice recipe will give me a fair chance of winning a prize in this years competition, but I must also clarify that it’s not just the biltong that has to be great tasting but that it should suitable to enjoy while sipping a glass of Stellenbosch Hills Shiraz 2007. 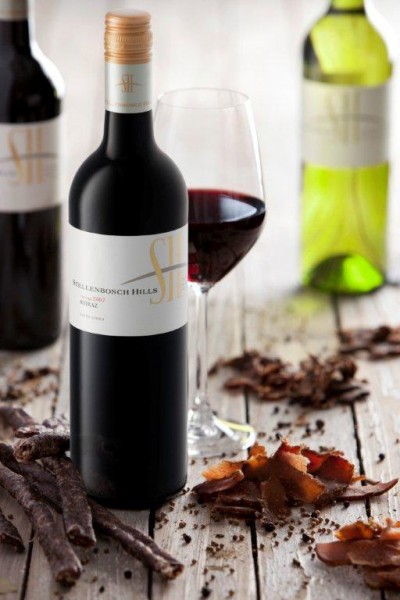 Winemaker PG Slabbert is responsible for making the wines from grapes grown on the 16 member farms in the vicinity of the winery. From these farms they are able to select the finest fruit for the Stellenbosch Hills, 1707 Reserve and Polkadraai range and the rest is sold off commercially. Stellenbosch Hills (previously Vlottenburg Winery until 2003) is located 8kms outside of Stellenbosch. A state of the art wine cellar along with a modern tasting facility, where they offer the world’s first” Wine and Biltong Adventure” makes the visit a memorable one.

Anyone can enter this year’s Biltong competition and entry packs cost R150.00 with prizes of R60 000 are up for grabs. The pack includes a bottle of Stellenbosch Hills Shiraz 2007, a Freddy Hirsch spice pack, as well as delivery costs. Visit www.stellenbosch-hills.co.za or phone +27 (0)21 881 3828 for more information.

The best thing for me about the competition is that I will be able to drink several bottles of the Stellenbosch Hills Shiraz 2007, as the one bottle in the entry pack certainly won’t be enough while I try out the different spices for my biltong before I make a final choice before closing date on the 31st August 2012.

Luckily the wine is delicious and as my first lot of biltong was not ready we enjoyed a bottle with friends on the weekend. We had prepared butterflied Lamb with a spicy marinade grilled on the Weber and the pairing was perfect.

The wine had a dark velvety colour with aromas of black cherries, dark chocolate and warm spice. The palate was rich and intense with silky flavours of dark spicy fruit followed by firm tannins with a savoury aromatic finish.