Blaauwklippen “Before and After” Aperitif

Posted at 16:44h in Wine of the week by HowdyPress 0 Comments

﻿Blaauwklippen has its history dating back to 1682 and is a farm that is steeped in family tradition. Since 1974 they have been producing excellent wines and are particularly well known for their Zinfandel, a delicious fruity red wine. If you are in the Stellenbosch area this holiday then a visit to this beautiful farm is a must as there is a lot to do besides tasting wine!!! Their carriage museum is a perfect example, with its sizeable collection of antique vehicles. Still in perfect condition, these romantic carriages will take you on a ride through their magnificent vineyards, before settling down to a light lunch at their Barouche restaurant. 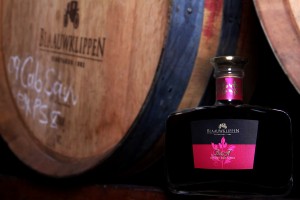 Rolf Zeitvogel, Cellarmaster at Blaauwklippen, is responsible for producing his fairly large range of wines, from dry to decadent dessert styles, from his 100 hectares of vines. Not content, however, with just producing wine he embarked on producing the excellent Blaauklippen Potstill Brandy which by chance inspired him to produce his latest product!!! It was during November 2009 while in his cellar checking up on his red Noble Late Harvest (from Malbec, Cabernet Sauvignon and Zinfandel grapes), as well as his Potstill Brandy, he had an inspiration for creating something new but different. The result was the “Before and After Aperitif”, made from a blend of wood matured red Noble Late Harvest and Blaauklippen Potstill Brandy.

After experimenting with various flavours, Rolf was ecstatic by the aromas of the Aperitif and found it to be reminiscent of his German grandfather’s Black Forest Kitchen during the Festive Season. He bottled some as Christmas gifts for colleges, family and special friends and was surprised by the positive reaction received! Rolf knew then he was onto a winner and that it could be enjoyed all year round and not just at Christmas time, so his intention to call it Christmas Liquor was not going to work! The challenge was on for a suitable name and when he was explaining to a friend how versatile the aperitif is, Before and After was born!!!

The Before and After is a blend of wood matured red Noble Late Harvest and Potstill Brandy which offers seductive silky sweet flavours of warm blackcurrent fruit with subtle hints of cinnamon and spice.

At home I enjoy it chilled over crushed ice after a good meal but be careful…it’s so good you will want a second glass and maybe a third!