Posted at 15:03h in Wine of the week by HowdyPress 0 Comments

﻿Mention the name Roodeberg and it brings back memories of a wine that many years ago was difficult to lay your hands on unless you had a Planting Quota with the KWV or lived overseas! This famous wine from KWV in Paarl has been a part of South Africa’s wine heritage since 1949, acknowledged across the world and known to be enjoyed at memorable gatherings to grand presidential inaugurations such was the success of the brand. 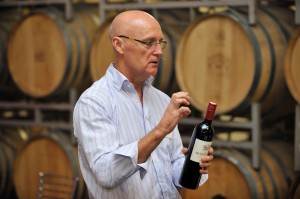 The man behind the wines success was Dr Charles Niehaus, a pioneer of the South African wine industry who was widely respected by all who came in contact with him. He was a man fondly remembered for his stern, orderly disposition and big, compassionate heart. Well travelled he had a knack for languages and a nose that could analyse and asses a wine to the finest detail.

In 1941 Dr Niehaus took over the fledgling range of dry wines from the former chief wine expert, Dr Abraham Perold. The range consisted of two reds, one full- bodied and the other light bodied as well as a white wine. The reds were known as Roodeberg Number one and Roodeberg Number two. Later the suffixes were dropped to avoid any misconception that one was inferior to the other!

Dr Niehaus decided to develop the fuller style which at the time was the number two which retained the name Roodeberg while the lighter style Number one was developed into the KWV Cabernet Sauvignon. The Doctor spent many years experimenting with varieties to make up the blend, but with the advent of Shiraz in the late forties brought drastic change to the blend. He along with other supporters for this cultivar believed it the ideal component for his famous wine.

Today, the link between Dr Niehaus and Roodeberg is cemented with the birth of a new wine. “A world-class wine, the Dr Charles Niehaus Roodeberg red blend, is made with the same philosophies that have stood Roodeberg in good stead over decades,” says Richard Rowe, KWV’s chief winemaker. “It is distinctively different; a premium wine for an international palate.”

However before we tasted the Dr Charles Niehaus Roodeberg 2010, Richard, led us through several vintages of Roodeberg starting with the 1977. I imagine the cellaring facilities at KWV are ideal as the older vintage was remarkable to say the least. It had delightful jammy red cherry fruit flavours with soft acid and subtle tannins leaving a warm comfortable feeling on the finish. The 1999 was still fresh with savoury spice aromas and rich berry fruit with balanced tannin. The more recent vintages , the 2009 and 2010, with their dark velvety plum colour delivered amazing rich complexity for wines that are made in large quantities…a credit to the wine making team!

The Dr Charles Niehaus Roodeberg 2010 will be an addition to the Roodeberg range and act as the flagship wine. The blend for the 2010, which spent 14 months in oak, is Shiraz (50%), Cabernet Sauvignon (40%) with the remaining portion being Merlot.

Velvet crimson in colour with aromas of blackcurrant and spicy green pepper the palate was rich with concentrated black berry fruit and grippy tannins which will soften given a few years of cellaring.

The wine is beautifully packaged in individual boxes and I have bought some to give away to friends as well as some for my cellar.