Posted at 13:10h in Wine of the week by HowdyPress 0 Comments

South Africa is experiencing an interesting start to Spring with some parts of the country having temperatures in the mid 30’s while we in the Cape are finding it difficult to leave the winter onslaught with colder than normal conditions!

Be that as it may Spring calls for a celebration so a good reason to open up some long awaited bubbles! A dinner this 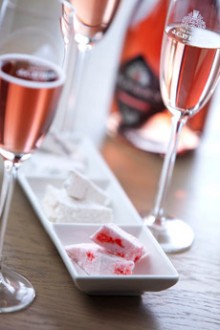 last weekend with some like minded wine friends started off with the latest offering from the House of J.C. Le Roux, their Pinot Noir Rose Brut 2008.

The House of J.C. Le Roux, in the tranquil Devon Valley outside Stellenbosch, was named after the Huguenot pioneer and viticulturist, Jean le Roux. Le Roux, who in 1704, left his native home in Normandy to settle in the area where he planted 8000 vines in and around the Stellenbosch district. Today the House of J.C. le Roux nestles on part of this historic farm that Jean Le Roux had lived on.

The House of J.C. Le Roux was the first South African cellar devoted to only making sparkling wine. The cellar produces both carbonated sparkling as well as traditional Methode Cap Classique, the South African term used for making sparkling wine using the French Champagne method. Perhaps the best known wines from the House are their carbonated semi-sweet sparklers the Le Domaine (white) and the Le Chanson (red).

The Cap Classique Pinot Noir Rosé 2008 is made by Elunda Basson, cellarmaster at The House of J.C. Le Roux “One of my personal favourites, this Cap Classique is perfect for the coming Spring. It is lively and fresh, yet beautifully elegant with that unique Pinot rosé colour,” says Elunda.

The wine has all the classic notes of a Pinot Noir with added maturation characters complemented by subtle notes of brioche aromas with delightful cherry and strawberry flavours. After secondary bottle fermentation the wine was left

to mature on the lees for a further 24 months to develop its yeasty, biscuity character and elegant mousse. The result gives the wine a perfect balance between freshness and maturation allowing it to be enjoyed on its own as well as with food.