Posted at 12:51h in Wine of the week by HowdyPress 0 Comments

﻿Ken Forrester (Ken Forrester Vineyards) and Martin Meinert (Meinert Wines) have worked closely together for well over a decade and this wine making relationship resulted in them producing arguably one of South Africa’s finest Chenin Blancs, the FMC (Forrester Meinert Chenin). The association started with Martin initially assisting Ken with the making of the Ken Forrester wines and in particular his Chenin Blancs, the wooded Reserve and the unwooded Petit Chenin, which year on year sell out to Chenin followers all over the planet. 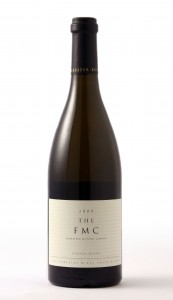 “The FMC project began with Ken’s statement that he wanted to make a benchmark Chenin that would challenge anything from France, and I have often tried, but never succeeded ignoring Ken’s ideas. I think the secret of the FMC’s success is that it is individual and very distinctive. ” says Martin

The FMC is produced from Ken Forrester’s prize vineyard, a 37 year old block of bush vine Chenin Blanc on the corner of his property Scholtzenhof. “Carefully managing an older vineyard is the key to quality. The yields are kept around 3 to 4 tons per hectare and each bunch is left with 16–18 leaves for ripening. The vineyard is picked a minimum of four times during harvest, with the help of the Normalised Density Vegetative Index, (NDVI) a system where aerial photographs determine which pockets are ready to be picked ensuring optimal ripeness. Furthermore the property is located in a valley near False Bay a mere 6 km from the Atlantic Ocean, enjoying a moderate, cool climate”. Ken explains.

‘I wanted to produce a world beating white wine, using Chenin Blanc. The aim was to create a wine that could stand up against any other Chenin Blanc or white wine across the globe. And Mother Nature is definitely kind to us, because unlike the Loire, we can get 7 good and 3 unbelievable vintages each decade: perhaps one in 10 will be classified as difficult’. Ken adds. 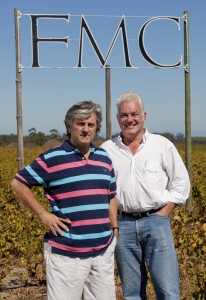 Experiments with what they called “The Chenin Project” started as early as 1997, but it was only in the year 2000 when they realised they were onto a winner. The first vintage, the 2000, was made in Martin’s winery, Devon Crest, located in Devon Valley, Stellenbosch. The 2000 vintage made its debut at the Cape Independent Winemakers Guild auction in 2001. It tied as the most expensive white wine on auction at R160 per bottle. The first FMC was released to market in 2001. The “recipe” stays the same every year, hand selected, low yield Chenin Blanc grapes are harvested at full maturity across a one month picking window. Natural wild yeast fermentation takes place in new 400 liter French barrels, and due to repetitive harvesting some botrytis is always present in the later pickings. A splash of Noble Late Harvest is added to the final assemblage.

The recently released 2009 vintage meant that the FMC celebrates its 10th vintage and to mark this occasion a tasting of all the ten vintages was held at Ken’s home recently. The wines were exceptional which proved once again to the experienced tasters present how well-made Chenin stands the test of time. I found the 2002 and 2005 vintages fascinating and still showing delicious fresh fruit and balanced acidity on the palate. However, the 2009, a cooler vintage, held everyone’s attention as the wine of the day for the reason that it had all the ingredients for longevity yet was magnificent to drink now! Clear bright colours of straw yellow with aromas of almond vanilla and dried apricot which balanced beautifully on the rich leesy citrus flavoured palate. A lovely winter white wine to sip slowly while cosing in front of a fire but equally good with a plate of food! We savoured the wine with oven roasted Kingklip with almond crust served on a creamy mussel risotto and cafe de Paris butter!