Posted at 13:17h in Wine of the week by HowdyPress 0 Comments

﻿Gary and Cathy Jordan of Jordan Wine Estate recently had to face a hard task of putting a stop to an application to prospect and mine various minerals on their farm and other farms in the immediate area. Through the power of social media and sheer determination from the concerned land owners the prospect was stopped and this allowed for a deserved celebration with the release of their new wine the Jordan Prospector Syrah 2008. 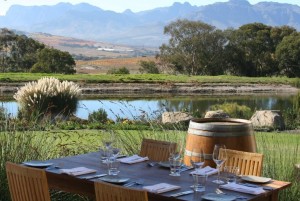 “Hailed as a victory for social media networks, the plans to prospect for minerals on landmark farms around the region were eventually thwarted, and we wanted to acknowledge the important role played by all the conservation groups, producers and friends around the world who helped save our land, in this fantastic new wine.” says Kathy Jordan of Jordan Wine Estate.

“As a former geologist, now winemaker, I understand the need for prospecting and mining, however in this case The Prospector Syrah will provide far more value, pleasure and enjoyment than a real prospector would have done,” says Gary Jordan.

The gravels underlying the Syrah vineyards at Jordan, centre of prospecting right application PR 424, contain traces of tin and other minerals, which were discovered during the South African gold rush of the 1800s. These minerals lend particular characteristics to this 100% Syrah with its rich, dense, dark chocolate, black fruit and fynbos flavours interlaced with white pepper. Barrel maturation adds toasty nuances to the richly textured structure. The wine was harvested from a selected west-facing vineyard overlooking Cape Town and Table Mountain with low yields ensuring the complex concentration of flavours.

The wine was launched at the Jordan Restaurant where a three course luncheon was prepared by George Jardine. The 2008 Prospector Syrah was served with Pan roasted blesbok, bourguignon garnish and foie gras. Delicious to say the least as the wine offered all the right ingredients for a perfect match.